Myanmar (formerly Burma), “The Land of Golden Pagodas” is a beautiful country located in South-East Asia, covering an area of 676,578 square kilometers (261,228 square miles), housing the population over 54 million people. Myanmar is rich with natural resources and its pristine nature is one of the many reasons for traveling the country.

Myanmar is home to hundreds of diverse ethnic groups of people. Myanmar officially recognizes 135 ethnic groups, among whom the Bamar account for the majority of the population. Other significant ethnic groups are the Shan, Kayin, Rakhine, and Sino-Burmese. The majority of the populace follows the doctrines of Theravada Buddhism. Those who are not affiliated with Buddhism are affiliated to either Christianity or Islam. Very few follow Hinduism or other religion. The Burmese food culture is mostly comprised of fish products such as fish sauce, ‘ngapi’ (fermented seafood), and prawns. ‘Mohinga’ (rice noodles with fish soup) is a traditional breakfast dish and is also Myanmar’s national dish. Seafood is plenty available and is common everywhere in Myanmar.

There are plenty of activities we can do in Myanmar. We can go to the city of Mandalay where we can visit famous sites such as Golden Palace Monastery, Kuyuk Taw Gyi Pagoda, Kuthodaw Pagoda, and Mahamuni Temple. We can also climb Mandalay hill for a magnificent view of the city and surrounding countryside. From Mandalay, We can also take a boat to the village of Mingun, and visit the pagodas, the spiritual center of Myanmar at Sagaing, and the ancient royal capital of Amarapura. If We love cruising then We also get the chance to cruise down the Irrawaddy River to ancient Bagan, where We can explore ancient sites including Shwezigon Pagoda, Gubyaukgyi, and Manuha and Nan Paya temples. Visiting Inle Lake is also a good choice as we can witness floating villages, gardens, and temples. We can visit Yangon, the former capital of the country, to see the stunning Shwedagon Pagoda. Yangon is the largest city in Myanmar, so we can go shopping if we are interested in local crafts.

The best time to visit Myanmar is from November to February as the temperature is favorable. March to May is also a good time if we do not mind the heat. June to September brings in the monsoon and during those times some places are closed due to road inaccessibility.

We can visit all the major sites within a period of two weeks. However, if we wish to explore all of Myanmar we will need more than a month as it is a big country. 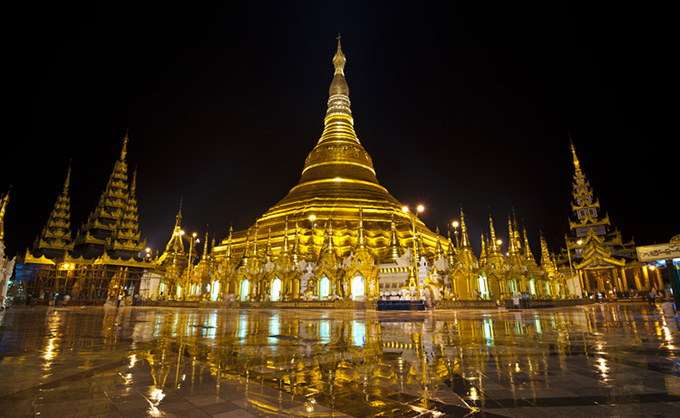