Cambodia, ‘The Kingdom of Wonder’ is a country located in the southern part of South-East Asia. It covers an area of 181,035 square kilometers (69,898 square miles) and is home to over 15 million people. With pristine desert-island beaches, jungles, and temples which are over 1000 years old, Cambodia is one of the key places in Asia which in recent years has been attracting travelers from all around the world.

The people of Cambodia are segregated into a few ethnic groups, the majority of whom are the descendants of the ‘Khmer’ group. Other ethnic groups include Chams, Vietnamese, and Chinese. Khmer is the indigenous group that originated from the lower Mekong River. The religious people of Cambodia follow ‘Theravada Buddhism’ along with the influence of Hinduism. A few follow Confucianism, Taoism, and Islam. Cambodian Culture is a mixed culture influenced by Buddhism, Hinduism, and Angkorian culture. The ‘sampeah’ is a traditional Cambodian greeting and a way of showing respect to others. The body stance is similar to that of the Thai greeting ‘wai’. French colonization during medieval times has also influenced the people and we can still see many people speaking French in Cambodia. Food culture in Cambodia is quite similar to those of other coastal South-East Asian nations as seafood and seafood products are common in every part of the country. Rice is their staple meal, and ingredients used in cooking include but are not limited to lemon grass, soy sauce, fish sauce, tamarind, ginger, oyster sauce, and coconut milk.

Lots of fun activities await us in Cambodia. The bustling capital city of Phnom Penh can be overwhelming at first sight but holds its specialty. The charming city is well-known for the Olympic stadium, where during the evenings we can observe people indulging in aerobics. We can also take a boat cruise on the Tonle Sap, the largest freshwater lake in South-Asia, which connects to the mighty Mekong River. We can fly to Siem Reap, a popular resort town and gateway to the ancient Angkor region. We can tour Angkor Wat, the largest religious monument in the world. ‘War Museum Cambodia’ and ‘Angkor National Museum’ are the famous museums where we can visit to get knowledge of the historical ‘Khmer Rouge’ and archaeological treasures of the area. Psah Chas, a market city in Siem Reap offers tourists many souvenirs and items produced in Cambodia.

November through April is the optimal time to enjoy Cambodia’s beauty to the fullest. This time of the year provides the best scenery as the precipitation is at the lowest it can reach. Other times of the year Cambodia is constantly battered by rainfall, but it should not be an issue if your travel is based on religious site visits. The end of summer is also a great time to visit Cambodia as the Lake Tonle Sap becomes vivid.

The majority of Cambodia’s traveling sites can be visited within a few days. However, it is recommended to manage a few weeks so that we can travel to Cambodia, Thailand, and Vietnam to get the maximum value of the time invested. 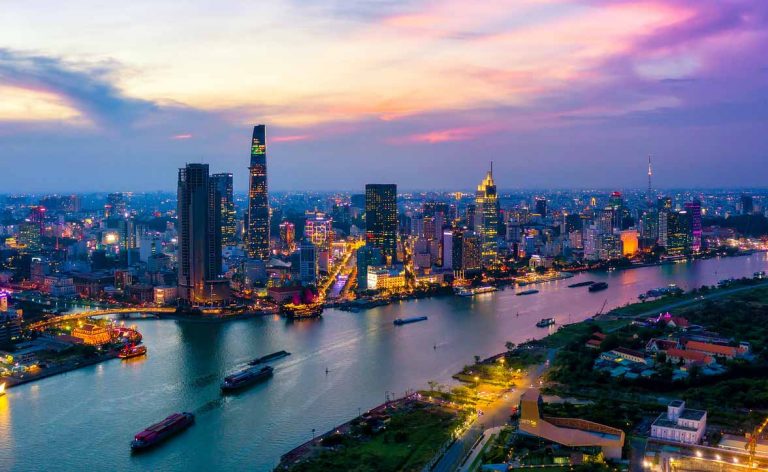 Vietnam, Cambodia & Thailand are the 3 most awesome countries in Asia. The combo tour is also known as the Indochina tour, due to the ...
Duration : 13 Days   Max Altitude :3,048m   Grade : Easy